5 Historic – and Dangerous – Uses of Lead

Before the dangers of lead were fully understood, this metal was used in surprising and dangerous ways. 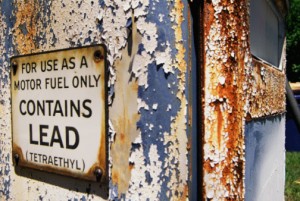 The past is full of examples of practices that by today’s standards seem misguided or even downright insane. The frequent use of lead in everyday items like food, plumbing, cosmetics, and home décor was common starting in Roman times, and even now lead poisoning continues to threaten public health. Here are 5 historic uses of lead that may surprise you.

The Roman Empire was one of the first major civilizations to set up large-scale plumbing systems. While aqueducts ensured a supply of fresh water to the citizens of Rome, this water became contaminated with lead as soon as it entered the network of lead pipes coursing through the city. Historians have proposed large-scale lead poisoning as one of the possible contributing factors in the fall of the Roman Empire.

Lead has a sweet taste, which belies its destructive nature. The Romans used lead-lined pots for winemaking, and also added lead to many recipes. Throughout the Middle Ages, “sugar of lead” continued to be used quite commonly as a sweetener. Even after sugar became widely available, lead made its way into the food supply by way of lead solder in canned goods.

Lead in cosmetics continues to be a problem even today. In 2012, the FDA tested 400 lipsticks and found they contained an average lead content of 1.11 ppm. The lipstick with the highest lead concentration had 7.19 ppm. Lead is not added deliberately to lipstick, but instead typically comes from the inclusion of other minerals which are used for color and may contain traces of lead. While the FDA did not conclude that the lead in lipstick is dangerous, some activists argue that repeated applications of even trace amounts of lead to the lips every day for a lifetime could add up to significant exposure.

From the 1920s to 2000, lead was used an additive in gasoline to reduce engine knocking. The National Academy of Sciences called leaded gasoline the greatest source of environmental lead contamination during these years, estimating that the US alone released over 7 million tons of lead into the atmosphere.

Cases of childhood lead poisoning were linked to lead paint as early as 1904. While some European countries took just 5 years to ban lead paint, the US took nearly 70. Lead paint was not phased out in America until 1971, when the Lead-Based Paint Poisoning Prevention Act was passed. However, many older homes still contain layers of lead paint, and the EPA regards lead paint in homes and businesses as the top contributor to lead poisoning in our country. If you suspect your home contains lead paint, don’t attempt to remove it yourself. Instead, contact a professional lead abatement contractor like AQHI Inc. to handle the job professionally and safely.